The Dominator vs The Friend

Today I’m looking at The Dominator vs The Friend in relationships.

A friend recently asked me a question after reading my first blog post on this website. Why, if I’m trying to promote weddings would I want to write about unhealthy vs healthy relationships? Won’t it put some people off getting married and lose me money? The simple answer is yes, it might. But if I can help to prevent one person from ending up in an abusive marriage that’s a good thing. I love weddings and want to share with people the beauty of my home. But my ability to pay the bills and have a successful business shouldn’t be at the cost of someone else’s overall happiness.

The Freedom Program was devised and written by Pat Craven who worked as a Probation Officer. Her book Living With The Dominator is available in various places, including Amazon. I attended the Freedom Program for a year from September 2016 and found it invaluable. Her book Living With The Dominator was then and still is my bible, I refer to it extensively here.

Pat Craven saw a pattern of personas within the abusive personality. As she says in Living With The Dominator, The Dominator was inspired by the Duluth Domestic Violence Intervention Project in Minnesota. She sees one person but describes them as changing into the other characters to use different kinds of controlling behaviour. Pat Craven talks about the dominator being a man controlling a woman. It is of course recognised widely that abuse is perpetrated by women as well as men. I will therefore use general terms rather than ‘he’ and ‘she’.

Domestic abuse/domestic violence does not solely consist of physical violence. And it can be hard to spot either by the victim or by those who care about them. We know when we’ve been hit, others might see bruises. But mental and emotional abuse and coercive control is harder to spot and come to terms with.

We don’t fall in love with the abusive person. The person they want us to see is who we fall in love with. Love bombing draws us in, flattering amounts of attention and rapid declarations of love, they love everything about us. They are charming to us, and our friends and family, drawing them in too. Perhaps they want to spend all their free time with you because they can’t keep away? The honeymoon period of a relationship is intoxicating and exciting. We don’t notice that we’re spending less time with friends and family because it’s so good with the dominator. It’s the hook that keeps us with that person when the abusive personas gradually start to show themselves.  It is the basis for a version of the Stockholm Syndrome that we are unwittingly drawn into. 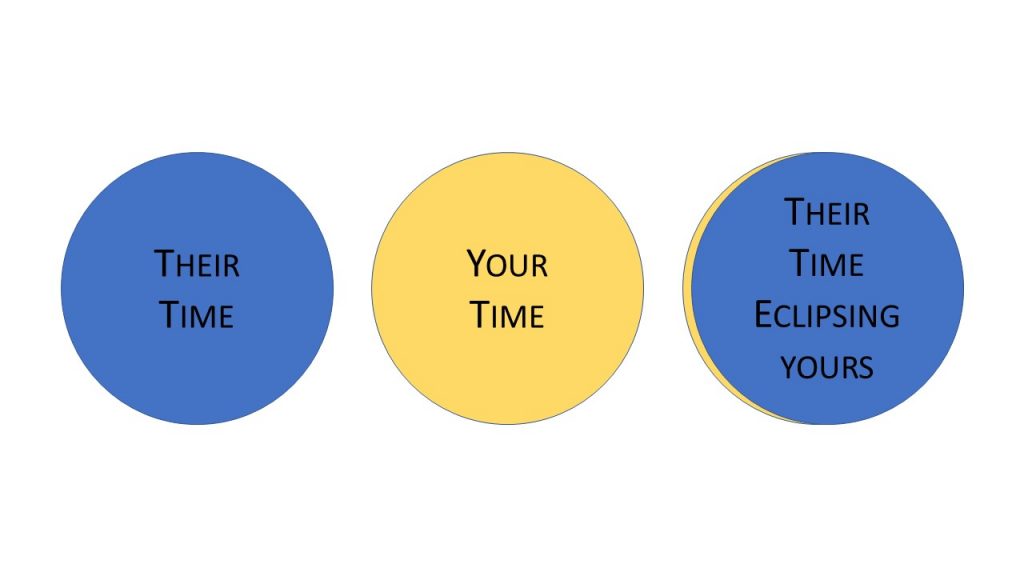 DA/DV is largely about the power and control one person can have over another. Excuses will doubtless be given for bad behaviour. Stress at work, illness, alcohol, drugs, unemployment, overwork, anxiety, insecurity, the list goes on. However, whilst some of these might exacerbate the behaviour, it’s an excuse not a reason. Do they treat others the way they treat you? If they hit, shout at or belittle you are you the only one they’re doing it to? They don’t usually hit or abuse others.

Not all of the personas might apply to each dominating person. One dominator might have one persona featuring in far greater proportion to others. The personas here are as described by Pat Craven in her book. In future blog posts I will look at each persona in more depth, however here is a precis:

Intimidation is the name of the game for the bully. You feel that they are angry but they’re not. It’s a tactic to get you to try to pacify them, to try to please them. They might shout, glare or sulk at you, and you have no idea what you’ve done wrong. Asking a string of questions without giving a chance to answer. Agressive and sometimes dangerous driving. Breaking objects or throwing things at you. All designed to make you feel on edge and intimidated.

Emotional abuse designed to make you lose confidence in yourself. Gaslighting is used to make you question your perception of reality. You might be made to feel stupid and ugly. Your competence in various areas of life might be called into question. You might be belittled in public – thinly disguised as ‘a joke’.

Isolation from friends and family so that you become dependent on the dominator. They might lie and tell you that a certain friend has said something nasty about you so that you don’t want to see them. This is closely linked with The Headworker, but the end result is that it isolates you from that friend. Or they might be difficult and horrible whilst friends are visiting you. This makes the friends feel awkward about visiting again so they stop coming, or you stop inviting them. You might be persuaded to move to a new area where you don’t have a support network of friends/family.

They lie about anything and everything. They make the abuse sound less than it is by using the word ‘only’, e.g. ‘it was only a slap’. They deny that they are abusing you and blame you. They fall back on the excuses, and you may well believe them. They will blame you if they slap you, you pressed their buttons, you know they’re anxious, etc.

King of the Castle

They will control the household one way or another. This can be the housework, laundry, etc but also the finances and decision making. You could be treated like a maid, you do everything in the house and they do nothing to help. You are only good for cleaning and cooking. Or they could take over everything themselves because they say that you’re not capable of doing anything. Either way, it’s their domain, not yours. They’re in charge, it’s not a partnership.

Sex is used against you. It could be forced on you (rape) or refused altogether. You are their chattel and it’s up to them if, when, and how sex happens.

Persuading tactics will be used to entice you back into the relationship. Or to persuade you not to report them to the police. Coercion or threats can be used to persuade or scare you to do what they want. Crying, promising to change, threatening your life or the life of others (children, pets, family members), threatening suicide.

Where does the belief come from that it’s acceptable to behave like this? The Dominator will hold a myriad of beliefs which they feel allows them to be abusive. Many of them are contradictory, known as cognitive dissonance.

The beliefs can come from the society they/we live in, from song lyrics or media, films. They can also be from information from those in authority, e.g. the Church or government. We all live in the same society and as a result we may well hold some of the same beliefs of the dominator.

In the 50’s after the war, as an article on stylist.co.uk describes, the women who had worked so hard at home for the war effort were unceremoniously booted out of their jobs and back into the kitchen: the men had come home! Women were encouraged to attend to their man’s every need. They were expected to stay at home, look after the family. That’s not to say that you shouldn’t be a housewife or househusband if you want to be. A relationship is a balance, and each relationship is different. But a role should not be imposed upon another person.

The Church promotes the sanctity of marriage and encourages couples to work things through. I am not against marriage, and relationships are not always easy. However, in the case of one person abusing another there is nothing to work through. Marriage should be an equal partnership, not a power play by one person over the other.

I do feel that with the internet being so readily accessible these days that it is easier to challenge these beliefs. We can access the internet on the go on our mobile phones or tablets as well as on laptops and PCs. I often whip out my mobile phone to check on something. Social media is also a platform for different beliefs to be aired. This can be good and bad. There’s pressure on people to conform to certain standards (size, weight, looks) and this can be immensely damaging. But it’s also good to see the views of others which challenge beliefs that you may have grown up with.

Although we all live in the same society, not all of us are abusive dominators! Not everyone who pays you attention or says they really like you will be abusive. There are a huge number of lovely people who have or want to have equal relationships. In a good relationship the partner will encourage you and enable you. You will be able to talk to them and to feel that your ideas and opinions matter. They will build you up with positive comments, they will co-parent and support you. You can confidently have a difference of opinion, and be able to compromise. 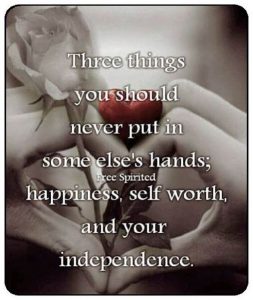 Not putting your happiness, self worth and independence in someone else’s hands doesn’t mean being alone. Having someone in your life who makes you happy is a good thing. However it’s important to be happy with yourself as you are. Knowing your self worth is essential in not allowing another person to undermine it.

The friend is a decent human being. Yes they will have bad days but they won’t make it your fault. They will listen to and be interested in you, it won’t be all about them. They will value you.

In a healthy relationship it is a balance of time. You have your time, they have theirs (e.g. work, hobbies) and there’s an overlap where you have time together. 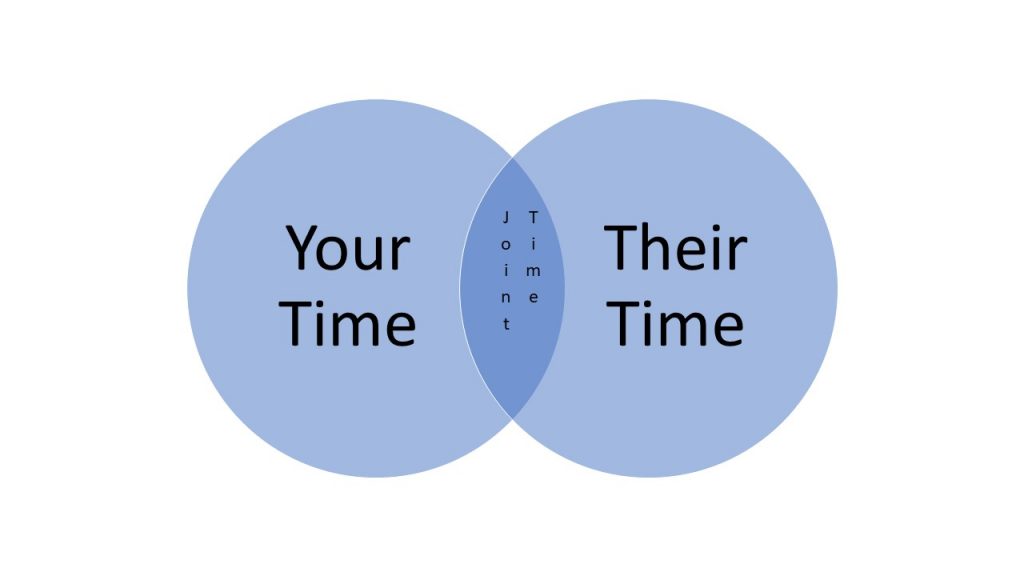 A post came up on my Facebook memories this morning (originally from Library of Thoughts) which is very fitting:

Do they professes to love you but their actions and words at other times contradict that declaration? This is a huge red flag! If you are made to feel bad, uncertain or miserable perhaps you need to re-evaluate your relationship. We all have bad days but we don’t all take it out on our partner. We might be grumpy, but we don’t make it our partners’ fault. Everyone should value themselves and try to surround themselves with people who enhance their lives. We should expect to be treated properly by others, as we would treat them.